Here is one hard fact; Australia has 1.7% of the population of Communist China.
Additionally, Australia is 80% of the landmass of Communist China. Australia is also heavily reliant on China with regard to trade. 39% all goods exported in 2019-20 go to China, while 27% of all goods imported were from China.
This is top of mind to the Chinese Communist Party.
As they have in other parts of the world, once China gets comfortable with their economic leverage, they will begin to use it against you.
They are not too good at it, and more often than not they come out as rather thuggish. They also lack cultural competence to see that what may work in some parts of the world, may not work elsewhere.
Case in point, Australia.
China has been pushing its influence in Australia for awhile, resulting in the occasional scandal and insult.
Their latest play seems a bit much;

Fraying relations between Australia and China have sparked a more than 25 per cent drop in coking coal prices even as iron ore — the other ingredient needed to make steel — has soared to six-year highs.
China last month placed what has been seen as an unofficial ban on imports of coal from Australia, following a sharp deterioration in diplomatic relations after Canberra called for an inquiry into the origins of the Covid-19 pandemic. On Friday, Beijing followed up with tariffs on Australian wine.
In a sign of China’s influence over commodity prices, since the coal ban came into effect the price of premium Australia low-volatility coking coal — the current industry benchmark — has dropped from $138.50 a tonne to $101.25.
Julien Hall, Asia metals pricing director at S&P Global Platts, said October was a “big tipping point” for the market as its recovery from the demand hit caused by the pandemic was put on hold by Beijing’s action.
“The need to find other destinations [for Australian cargoes] led to a rapid fall in the price,” said Mr Hall.

To top things off, this happened over the weekend; 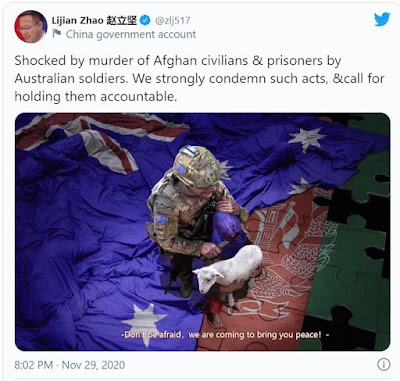 A Chinese Foreign Ministry spokesperson has hit back at the Australian government's demands for an apology over a doctored photo posted by a Communist Party official.
The photo, blasted as "repugnant" by Prime Minister Scott Morrison, has been altered to depict an Australian soldier holding a knife to the throat of a child atop the Australian and Afghanistan flags.
China's Foreign Ministry spokesperson Zhao Lijian today tweeted the faked image, sparking Mr Morrison's swift rebuke demanding an apology from China and for the image to be taken down.
...
"The Australian side is reacting so strongly to my colleague's Twitter," Ms Hua said, the Sydney Morning Herald reports.
"Does that mean that they think the coldblooded murder of Afghans is justified? The Australian government should feel ashamed of this; they owe an explanation to the world and they should solemnly pledge such crimes will not be repeated."
The Brereton report was actioned by the Australian government after allegations of improper conducted by SAS troops.
READ MORE: PM urges restraint over alleged war crimes exhibits at War Memorial
Mr Morrison earlier today said Australia was demanding an apology and immediate removal of the image, which he labelled as "false and a terrible slur".
"There are undoubtedly tensions that exist between China and Australia. But that's not how you deal with it," he said.
"It is deeply offensive to every Australian who has served in uniform.
"It is outrageous and can't be justified on any basis whatsoever."

The Australians don't need me to tell them this - but make no mistake, the Chinese don't just want to force Australia to submit to their will - they want to humiliate Australia. The Chinese do not see them as equals - and in the long run they have plans for Australia that they need to set the proper conditions for.
I'm not sure what we can do from here but be an even better friend and ally to Australia. Buy some Australian wine ... but more importantly, let both Australia and the Communist Chinese government know that we see exactly what they are trying to do, and call them on it.
The international community needs to get used to this. This is what dealing with a powerful China will look and feel like.
Best thing nations can do is not to rely on Chinese money all that much. Their money comes with strings.
at 11:22
Share