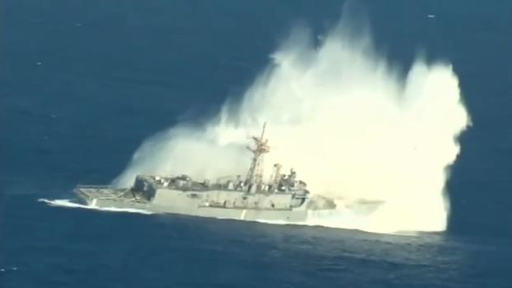 Some of my most memorable peacetime experiences in my naval career were SINKEX. I mean ... really people.
There is the "fun" factor - but I also fully appreciated the good information we received from sending warshots downrange. Sure, the targets didn't shoot back or try to intercept our weapons ... but it did give you a good outline of the performance of those things in the kill chain you could control.
That is why - while using the exceptional google translate function - this bit from Russian open source caught me off guard;

... testing modern means of destruction of the Navy on it. And as an example here, we, alas, the US Navy, which does not just use old ships as targets, such firing has a pronounced research character, all reports on which, of course, the US Navy is tightly secret (with a minimum of details for the media).
Such events have not been carried out in our fleet for many decades, despite the fact that new anti-ship missiles with a sharply reduced mass of warheads are being adopted for service, the issues of the real effectiveness of which on large ships are acute.

That's right kiddies ... the Russians and the Soviets before them were not in to doing SINKEX.

I find that, frankly, amazing. You learn so much by doing even these highly controlled and scripted exercises from both a weaponeering and damage control point of view.

While we may need to work on basic seamanship and preservation, there are two things we like to think we are good at compared to other navies; damage control and weaponeering. Both of these assumptions - which I think are very defendable - derive a fair bit from what we learn from SINKEX.

At war, our weapons may not be as good as we think they are ... but pondering the Russian admission above, I have to wonder ... what effectiveness are Russian weapons in comparison?

I know what I assume ... but maybe even less effective?

As a side note, take time to read the full article linked to above. Nice discussion of lost opportunities by not having proper stewardship of existing warships ... and even a dig at LCS. Nice confirmation of what I had heard SEPCOR about Soviet Era gas turbines.