Zinni on Wargaming ... Value and Danger 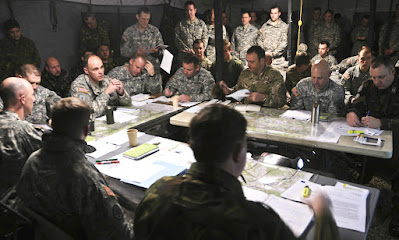 Simply a superb interview with General Anthony Zinni, USA (Ret) by Mie Augier and Major Sean F. X. Barrett, USMC over at CIMSEC.
What is so impressive about it is the the focus of the interview - wargaming.
There are few things more misunderstood, abused, and poorly done than wargaming. Done incorrectly, either by incompetence or malice, it can lead to the death of millions and the destruction of nations. No, that isn't an exaggeration.
Let's pull a few quotes that grabbed my attention;

I think gaming was more valuable at the lower levels, at the tactical level, maybe lower operational level. ... As you go higher up, I found there was too much in the way of service politics and other things that were injected into the games.

Bingo. This is where elections and the system of incentives and disincentives in our promotion systems can bring disastrous effects.

You will hear a lot of "X was wargamed and Y was the result" - be very suspicious of these claims, especially with systems and CONOPS that are vaporware.

If somebody talks about a game, I am usually highly suspicious about what the purpose is, who is designing it, and who is sponsoring it.

Question everything until you feel comfortable you know where people are coming from.

I loved the fact that over two decades later, Millennium Challenge keeps popping up.

NB: we interviews Van Riper 9-years ago on Midrats if you'd like to give it a listen.

There is a lot of great stuff in the interview, especially about the timeframe from DESERT FOX to the 2003 invasion of Iraq. Yes, there are contradictory stories out there ... but Zinni is part of this and his view should be included in your consideration.

They started the game, and there was a lot of media attention. After the first two or three moves, Van Riper had sunk half of Fifth Fleet and destroyed a corps. They stopped the game because it was now turning into a disaster. They brought everybody in and said they were going to restart the game because some things didn’t go right or whatever. Van Riper didn’t do what they thought or assumed he would do. They thought they had him figured out, had the “enemy” figured out.

They started the game again—same result. Van Riper kicked their butts, and now they stopped again. People were coming down from the Pentagon, and this was becoming a problem. They then said they were going to start for a third time, but this time they told Van Riper what he had to do. He said if they wanted him to go by a script, they had to advertise that it was not free play—that it was scripted. You can’t advertise something as free play when it is really being scripted—that is dishonest. They told him they were not going to do that, but that Van Riper was going to be scripted in many of the things that he could do.

The next thing that happened was a bunch of the majors that were down there revolted and went to the media, and of course Van Riper then became a superstar for every young officer in the military. Malcolm Gladwell even wrote about it. This went all the way up to the Joint Chiefs, and the Joint Chiefs dissed Van Riper and didn’t defend him. Van Riper became the hero for everybody involved in Millennium Challenge below the rank of one-star.

I wonder where those majors wound up?

This part is superb; 1) a view on the present threat from Chinese ASMB/ASCM; 2) beats the assumptions drum I love to hear;

Yes, it is in our nature to become overreliant on technology because we created this dependency on it, and in addition to that, in some ways, we don’t leverage it enough. Every time I get into a discussion with someone about facing a peer-level military threat, it always comes down to the same thing: Well, they’ve got missiles that are going to crush us. The answer is always that we must go after those missiles, we must find them, and shoot them down. What everybody is losing sight of is one of the first things I ask: How does the missile know where you are? Then there’s a fall back: Tell me how they target you. The missile is back there, and you are out here, and they can’t see you. Something is targeting you. Is it a satellite? Is it a recon unit? Instead of wasting all this effort and resources on new technology to kill the missiles, could we blind their missiles? Could we deceive the missile in some way? Maybe the focus of our technology should be on defeating targeting, and maybe the ways we defeat it is to give it a false image, to blind it, to deceive it. To address the threat through better tactics, using what we already have. No one ever talks about that. Everybody just pushes the technology to kill the missile. My point is that it is not just overrelying on technology. Sometimes it is not knowing how to use technology through tactics to build an advantage.

In Millennium Challenge, the blue force was totally dependent on monitoring the red team’s communications, so Van Riper did not use any digital technology. He used motorcycle couriers and all kinds of alternative, simple sources of communication. He did nothing that could be captured or intercepted, so they were totally blind. They put all their eggs—that they would have superior technology to intercept his communications—in one basket. They assumed he would never initiate the fight—that this enemy would be so overwhelmed he would not attack during the build-up phase. Of course, Van Riper immediately attacked. It was a beautiful thing to watch! When we make too many assumptions, it becomes a vulnerability.

Read it all, and keep an eye out for Part-2.  Yes, I've had some issues with Zinni a decade and a half ago, but time has show that many of his concerns were solid, and I was not fully correct on my own assumptions. As such, agree or not (no one is perfect), he is a person worth listening to. I should have had a more open ear to him in the past.