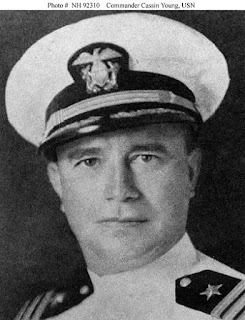 You graduated from the Naval Academy with the world at war. While it seemed your nation’s politicians were saying they would do all they could to stay out of this war – you probably knew better. It was a big war, and one side was being fed and armed from our side of the ocean.

After graduation you get assigned to a battleship – and within a year, your nation goes to war. Your battleship was not just any ship, she was the USS Connecticut (BB-18), the flagship for The Great White Fleet a decade earlier, and now flagship of the Fifth Battleship Division.

Yet, your war never really came. You spent the war never leaving the east coast. You spent the entire war on what you realized soon, was an obsolete hulk of another age best used for what it was used for, training of others. 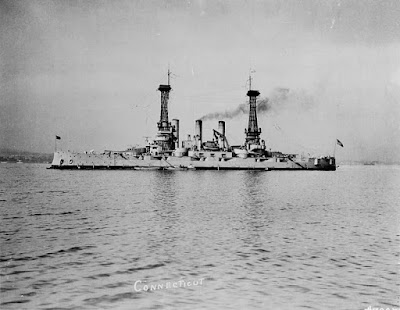 With the war over, you knew naval war was in a new age – an age where the submarine and the aircraft would change forever how power is brought from the sea.

You went to sub school and spent the next 12 years in the submarine service. A select group of select officers still trying to understand how to make these exciting new platforms work.

Big Navy was not through with you though, and back you went to battleships, the 15-yr old USS New York (BB-34). Your nation by now was in the grips of a nightmarish depression and the world was quiet. 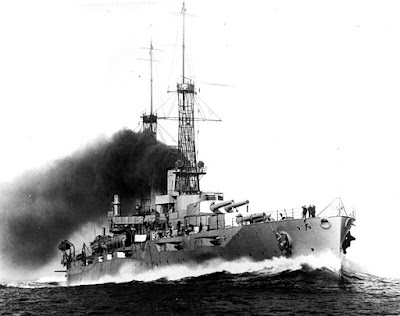 You had a great tour and as a LCDR was given command of the USS Evans (DD-78). The 4-stack destroyer had been in the Navy as long as you had and was just a few years from being sent to mothballs, but she was your ship. 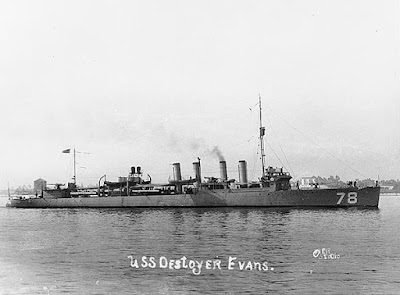 You did well in command and post-command shore duty. As the world started to heat up again in 1937 you make Commander and your Navy sent you back to submarines with the honor of commanding Submarine Division Seven in Groton.

Again, the world headed to war yet you had aged out of operational units. Command is command though … and as an East Coast Sailor, your friends at BUPERS had something interesting – a 32-yr old former collier converted into a repair ship based out of Pearl Harbor, Hawaii. The USS Vestal (AR-4).

You’ve been in the Navy 25 years, almost 30 if you include your time at Annapolis. Maybe we’ll stay out of this war, maybe not … but command of a ship – any ship – in Hawaii, well, there are worse sunset tours for a Commander.

Then came one December Sunday halfway through your command tour; Commander Cassin Young, USN – history is finally calling, and you’re on her short list:

...Sunday in port was shattered shortly before 08:00 as Japanese carrier-based aircraft swept down upon Pearl Harbor. At 07:55, Vestal went to general quarters, manning every gun from the 5-inch (127 mm) broadside battery to the .30 cal. Lewis machine guns on the bridge wings. At about 08:05, her 3-inch (76 mm) gun commenced firing.

At about the same time, two bombs – intended for the more valuable battleship inboard on Battleship Row – hit the repair ship. One struck the port side, penetrated three decks, passed through a crew's space, and exploded in a stores hold, starting fires that necessitated flooding the forward magazines. The second hit the starboard side, passed through the carpenter shop and the shipfitter shop, and left an irregular hole about five feet in diameter in the bottom of the ship.

Maintaining anti-aircraft fire became secondary to the ship's fight for survival. The 3-inch (76 mm) gun jammed after three rounds, and the crew was working to clear the jam when an explosion blew Vestal's gunners overboard.

At about 08:10, a bomb penetrated Arizona's deck near the starboard side of number 2 turret and exploded in the powder magazine below. The resultant explosion touched off adjacent main battery magazines. Almost as if in a volcanic eruption, the forward part of the battleship exploded, and the concussion from the explosion literally cleared Vestal's deck.

Among the men blown off Vestal was her commanding officer, Commander Cassin Young. The captain swam back to the ship, however, and countermanded an abandon ship order that someone had given, coolly saying, "Lads, we're getting this ship underway." Fortunately, the engineer officer had anticipated just such an order and already had the "black gang" hard at work getting up steam.

The explosion touched off oil from the ruptured tanks of the Arizona which in turn caused fires on board Vestal, aft and amidships. At 08:45 men forward cut Vestal's mooring lines with axes, freeing her from Arizona, and she got underway, steering by engines alone. The naval tug Hoga, whose tugmaster had served aboard Vestal just a few months before the attack, pulled Vestal's bow away from the inferno engulfing Arizona and the repair ship, and the latter began to creep out of danger, although she was slowly assuming a list to starboard and settling by the stern. At 09:10, Vestal anchored in 35 feet (11 m) of water off McGrew's Point. 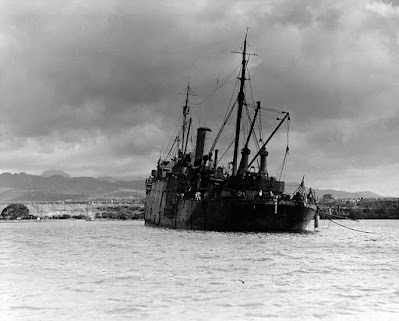 With the draft aft increasing to 27 feet (8 m) and the list to six and one-half degrees, Commander Young decided upon another course of action. "Because of the unstable condition of the ship", Young explained in his after-action report, "(the) ship being on fire in several places and the possibility of further attacks, it was decided to ground the ship." Underway at 09:50, less than an hour after the Japanese attack ended, Vestal grounded on 'Aiea Bay soon thereafter. Commander Young was awarded the Medal of Honor for his actions that day.

Many of you may recognize that name. He was promoted to Captain, given command of the USS San Francisco (CA-38) and was killed in action 13 NOV 42 during the Naval Battle of Guadalcanal leading his ship against the Imperial Japanese Navy’s Battleship Hiei.