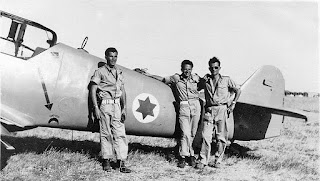 Most of your people slaughtered. In front of you is the land of your ancestors, a land you do not know, mostly desert and waste. You are surrounded by large numbers of a well armed enemy on the march. You have the option of going home, or to ride off to war in a cheap copy of an outdated weapon.

Of course, you gather around you fast friends, and head to the sound of rolling tanks.


WWhen Lou Lenart was growing up in a Pennsylvania mining town, he endured beating after beating because he was Jewish.

After he took a Charles Atlas bodybuilding course, he joined the Marines and fought in the Pacific. A few years later, he smuggled warplanes into Israel, helped found the new state’s tiny air force and led an attack on more than 10,000 Egyptian troops who had advanced to a bridge within 16 miles of Israel’s biggest city.

“It was the most important moment of my life, and I was born to be there at that precise moment in history,” he told the Jerusalem Post in 2012. “I was the luckiest man in the world that my destiny brought me to that precise moment to be able to contribute to Israel’s survival.”

Lenart, hailed in Israeli headlines as “the man who saved Tel Aviv,” died Monday at his home in Ra’anana, Israel. He was 94.
...
Lenart kept a home in Los Angeles as well as one in Israel. One of the planes he flew as a Marine fighter pilot is on permanent display at the Proud Bird restaurant complex near Los Angeles International airport.

But he is most closely associated with a 40-minute strafing and bombing raid on Egyptian columns that had marched up the Israeli coast from Gaza on May 29, 1948. With tanks and trucks, the troops were stalled at a bridge that had been blown up by Israeli commandos. In another day, they would have rolled into Tel Aviv.

With only a few hours’ notice, Lenart and three other pilots hopped into Czech Avia S-199s — small, rickety planes that had been pieced together with parts from German Messerschmitts, dismantled before being covertly shipped to Israel and reassembled on a makeshift airstrip.

“We had never flown the planes before,” he said. “We didn’t know if they would fly or if the guns would work.”

In fact, Lenart’s guns jammed. One of the planes, piloted by a South African named Eddie Cohen, went down in flames.

“We lost one-fourth of our air force that day,” Lenart later said. “It was like a piece of your heart being broken off.”

But, surprised by the attack, the advancing forces ultimately withdrew. The bridge where they had bogged down is still known as Ad Halom — or “Up to Here.”