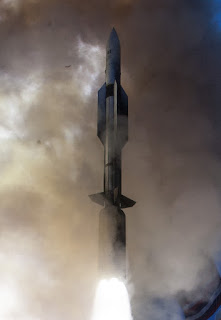 BZ to the Army for selecting some excellent weapons to tweak a bit to suit their specific requirements, and then add to their weaponeering tool kit.

As covered by Syndey Freedberg at the end of last week;

...the Army has chosen to mix two very different Navy weapons together in its prototype MRC (Mid-Range Capability) unit: the new, supersonic, high-altitude SM-6 and the venerable, subsonic, low-flying Tomahawk.

“Following a broad review of joint service technologies potentially applicable to MRC, the Army has selected variants of the Navy SM-6 and Tomahawk missiles to be part of the initial prototype,” says a Rapid Capabilities & Critical Technologies Office (RCCTO) statement released this afternoon. “The Army will leverage Navy contract vehicles for missile procurement in support of the Army integration OT [Other Transaction Authority] agreement.”

That is programspeak for, "We need to get this capability forward as soon as possible. No, we don't have two decades to make our own stuff. Navy has already done the hard part and has some nice kit. Let's slap a Army sticker on it and get this moving."

Though it was owned by the USAF at the time, at the end of the Cold War we deployed to Europe the nuclear BGM-109G Gryphon Ground Launched Cruise Missile (GLCM). Leverage that experience and modernize it, as the modern Tomahawk is to the old TLAM - but this time in a conventional mode - and you have a nice capability.

The SM-6 is already wired with a secondary anti-surface mode at sea, so this too should be an easy path.

Some of the usual suspects will get grumpy because, damblit, the US military has a new capability, but they should pack sand.

If you desire peace, plan for war - and these missiles play to our comparative advantage.

BZ to everyone on a sound decision. 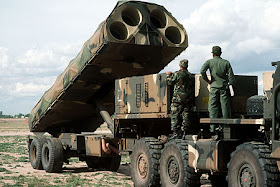