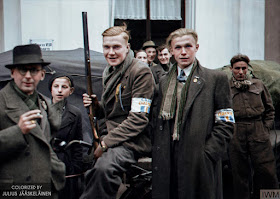 A little different DivThu today. I’m not going to cover a specific outrage or Orwellian program, no, something different but more important.

Consider this a war warning.

Firstly, I need to repeat something for my Trump supporters here; until the Summer of 2020, he completely failed in this area. As people are policy, he failed in that he did not appoint people who understood what was going on in the larger culture. He finally caught on to what was going on and acted, specifically on Critical Race Theory, but that was him. He quickly saw what it was and took action.

He needed dozens to hundreds of political appointees to see the problem and act on their own as he did, but they were absent from the field.

The people he brought in to his administration simply were not brave enough, or knowledgeable enough, to understand what this new cancer with the friendly sounding names, Diversity and Inclusion, really meant when operationalized.

As opposed to promoting what all well-meaning people desire – a republic where you are judged by the content of your character and not something as meaningless to the individual as race, creed, color, national origin or who you want to spend a long weekend in Tahoe with  - instead the Diversity Industry desires to promote sectarianism and division. To keep the people divided along arbitrary groups that can be pit against each other, fighting over things they cannot do anything about – specifically what they were born as or what was done hundreds of years ago.

As there is nothing that can be done to correct either of those things, the crisis and conflict never ends. The ability to manipulate and control blocks of people never ends. The hate and anger such a world view provokes never ends, the externalization of internal frustrations never ends, and most importantly to the Diversity Industry – the contracts never end, the jobs never end – the  Möbius strip gravy train never ends.

Identity politics is the political arm of the Diversity Industry. Identity politics is a critical foundation stone, sadly, of the (D) party. Unlike the (R) party opposition to Identity politics, which is an afterthought at best, the (D) realize the power of this brain stem tactic and are serious as can be about it. They will bring it with them everywhere as they once again get access to levers of power.

For those of us who desire unity not division; equality not preference, opportunity not selection, freedom of thought vice ideological compliance – we are about to enter a time of strife.

In the summer of 2020’s unrest, the Diversity Industry took advantage of the opportunity and have a lot of the civilian world already spooked. Many of you have seen it in the new Diversity and Inclusion divisions, training programs, and new requirements concerning undefined “hate speech” and “social media audits” with Star Chamber like decisions on who will be fired or not, etc.

Many of us will find ourselves in positions to be part of these Star Chambers, selection committees, disciplinary arms, or just a gear in machine feeding the Diversity food trough, in both civilian, government, and military areas. This is where you need to be careful

As I’ve offered earlier, you do not have to totally submit to this totalitarian mindset. You don’t have to be a martyr. They don’t have to win every battle. You have to think like an insurgent, act like a guerrilla.

Ask polite but hard questions with an innocent tone and expression. Take the indirect path. If the commissariat demands metrics, nominations, or anything with a deadline – be late. Be incomplete. Be out of travel funds. Send your response to the wrong office code. Miss the photo-op. Be double-scheduled. As for requests in writing, and then reply with questions or clarification requests. Be a bit dim. Do not put yourself in danger, or those who rely on your position or leadership – but don’t be a willing participant to what you know is wrong and divisive.

They will not be in power forever – but you will have to look at yourself in the mirror every morning.

Follow orders, but do not volunteer. Do what you must, but do not do it well. Ignore what you can. Be absent minded. Smile, be polite … almost to the edge of being patronizing but remember this one thing – those who make a living in the Diversity Industry know who they are and what they are doing. A very small percentage are true believers whose hearts are in the right place. They are not bad, they are just wrong – but make no mistake, they are the minority.

Most of the people in the Diversity Industry – remember, strife is their mother’s milk - spend their days soaked in grievance, resentment, and a sectarian view of everything. They do not really care what is going on – they just want to know the characteristics of the people doing it.

Remember, these are the people who demand that mixed race people MUST choose which of their genetic lines they prefer over all others to either gain advantage, or to be marked as privileged. These are people not motivated to solve problems, but to stoke them to grow. Only through the ongoing struggle to they justify their existence and their paycheck.

If they perceive in any way that you are a barrier to their existence and paycheck, they will set out to destroy you. Like all witch hunters, they must find a witch. If they cannot find one, they will create one. Remember my point above, do not be a martyr. This time will pass, but keep your honor intact.

This brings us to the future. At some point, the (D) will be out of power. When that happens, will the (R) demand that we pick up where the Trump administration started to clue in the summer of 2020?

Will we go after the nomenklatura and commissariat of the Diversity Industry that will be larger, stronger, and more embedded than it is now? Nothing was done to dismantle it in 2009 to today, so it has been hibernating – waiting for the (D) to return … and it will grow as long as they are in power.

Will we have the leaders willing to be called names and smeared all because they said; “No. We will no longer discriminate or give any preference based on race, creed, color, national origin as was done before.”

That is easily defended. That is unquestionably moral. In a wonderfully diverse and large nation such as ours, it is the only way to ensure we continue in peace and grow as a unified people.

Buck up everyone. This is going to be a rough ride. Look out for each other. Support each other … and when the cancel culture circles around someone, defend them.

You are next; you’ll need friends.