So, I guess we need to talk about the STOUT. This is a regular topic here, so let's see what the navy has to say. 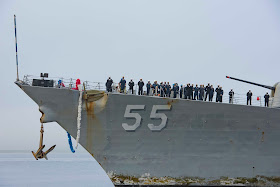 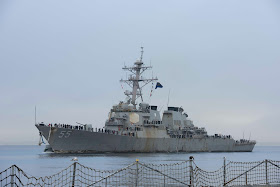 While in U.S. 6th Fleet Stout conducted two port visits in Rota, Spain, bookending their record-breaking 215 days at sea. Both port visits in Spain enabled the ship to take on fuel and fulfill other logistical requirements before continuing their mission at sea.
As COVID-19 made frequent port visits unsafe, Stout competed the first modern Mid-Deployment Voyage Repair (MDVR) period at sea, spending a week executing scheduled maintenance and preservation to maintain mission readiness while deployed. Throughout deployment, Stout’s technicians executed depot level repairs on vital engineering and combat systems equipment. During that period the ship conducted morale events, like swim calls and steel beach picnics.
Stout conducted nearly 40 replenishments-at-sea enabling their continuous support to the mission. To allow the crew time to relax and reenergize, they had a "rest & reset" period at sea. 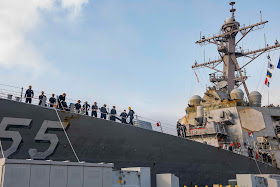 Of course, one has to give a great nod of respect to the crew of the STOUT. As our Sailors have from even before the founding of our nation, they answered the bell - that is not the issue.
I have the three big pictures above for the simple reason that it saves me 1,000 words about how appearance matters for a Navy whose primary peacetime mission is presence. Our warships represent our nation - and looks matter.
Yes to all in the above pullquote ... but that is an excuse, not a reason. The reason is that someone decided that - best told by them - it was best to keep the ship and its Sailors at sea, because?
...and don't blame COVID-19.
I'm sorry - but none of the missions outline justify what is clearly abuse of our Sailors' service.
If we don't have enough ships to do the missions we tell ourselves we "need" to do ... then leave those mission gapped. Deploy for 180 days as is standard for peace. If the powers that be want more, then they can buy us more ships - but we cannot have a navy ready for war if we are wearing them out at peace.
Yes, STOUT will look better after a lot of money and time ... but what a waste.
I note that we have already forgotten the lessons of 2017. There is nothing to be institutionally proud of a ship having to do depot level maintenance.  BZ to the crew, but raspberries to those who forced them to do it ... at peace.
How does the reality vibe with this?

The Skipper is spot on, however;

“I don’t have the words to describe how immensely proud I am of this crew,” said Rich Eytel, commanding officer, USS Stout. “This crew defined what it means to be self-sufficient and resilient. We’ve gone for significant lengths of time without new parts, stretched our food and fuel limits, and they continued to give 110% every day. They faced our challenges head on, which allowed us to continue to meet all operational tasking.”

Those words do not cause cringe. Those words ring true ... but they are also words that speak to unnecessary sacrifice and abuse.

It speaks to a poorly run and utilized Navy.

You can spin all you want. You can spit at me for saying it ... but you know it to be true.

I don't know what it will take for our navy to stand up for itself, but right now we are in an abusive relationship with our COCOMs and those who should be standing up for it are not.