We have all seen this brief every decade or so for decades. You can almost use the same sales pitch as before, just move the clauses around.

We know what is wanted - but it is hard. Instead of saying that, we try to trick everyone in to thinking there is a new idea out there.

There isn't ... and every time "we" pretend there is, we lose more credibility.

The latest example from the, “This is Why DOD Can’t Have Nice Things” is the superbly mockable “Joint All-Domain Command and Control" (JADC2) concept. It is almost insulting in that is seems to be written by people who either themselves don’t know what has been going on in this area for the last few decades, or they assume no one else has institutional memory either. Just bask in the opening;

Joint All-Domain Command and Control (JADC2) is the Department of Defense’s (DOD’s) concept to connect sensors from all of the military services—Air Force, Army, Marine Corps, Navy, and Space Force—into a single network.

For those with an Electronic Warfare background and an onion-paper thin understanding of what the Chinese and Russians are capable of today – or even what they did as far ago as the Vietnam War - just behold Figure 1. 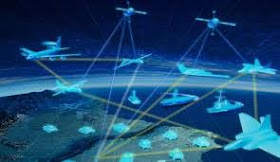 If you transmit, you will be tracked, identified, and attacked. Transmit all day long, even easier. You then have the intellectual hangover from a couple decades of colonial policing;

Do we assume the enemy can’t do the same? What is your backup?

Some analysts take a more skeptical approach to JADC2. They raise questions about its technical maturity and affordability, and whether it is even possible to field a network that can securely and reliably connect sensors to shooters and support command and control in a lethal, electronic warfare-rich environment. Analysts also ask who would have decision making authority across domains, given that, traditionally, command authorities are delegated in each domain rather than from an overall campaign perspective. Some also question how much a human will be needed for JADC2 to make decisions in real time, and whether it is appropriate to reduce the amount of human involvement in military-related decisions.

Oh, I don’t know … is there a reason to be skeptical? 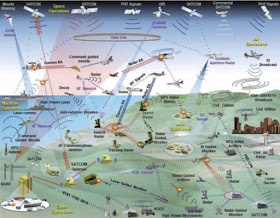 This diagram, or variations of same, is decades old. Jokes about it are older than those just putting on LCDR. This was always the promise that was never kept. Why would anyone use this diagram who wanted to be taken seriously?
Unachievable at war. War isn't that clear or clinical. You simply will not have that level or reliable access in a peer conflict’s most important inflection points.

The Joint All-Domain Operations concept, thus, provides commanders access to information to allow for simultaneous and sequential operations using surprise and the rapid and continuous integration of capabilities across all domains—to try to gain physical and psychological advantages and influence and control over the operational environment.

Misuse of the word “concept” here and all over the place. I don’t know, maybe we can tell what you are proposing through all all the recycled CONOPS, opaque verbiage, and word salad acronyms.

DOD is leading a Joint Cross-Functional Team to explore JADC2 as the concept evolves.

Have you filled out your bingo card yet? Multiple bingo cards.

The Army and Air Force have announced programs to implement JADC2; what are the Navy’s plans to implement this new command and control concept?

Is that Deptula throwing shade there? Anyway, I don't know .. maybe we can tell what you are proposing this to be through all the recycled CONOPS, opaque verbiage, and word salad acronyms.

What role would AI have in JADC2 development?

None. How about that for an answer. It isn't ready - not even close - and those in industry know AI isn't ready for late night, much less prime time. That is before the JAG gets at it.

How much human-in-the-loop is necessary if sensors are linked to shooters in real-time?

A lot.
As someone who used to work in this area, let me help you out.
Ahem: “After decades of attempts, the Secretary of Defense will conduct a baseline reset of the ability for each service’s data links to communicate with each other in real time through peacetime and degraded wartime constraints. Systems shall also maintain the ability to function as stand-alone systems, partial functionality, or in an offline mode.”
So much of this, again, is trying to sweep up as much money as possible for a program that promises perfect information and perfect knowledge. Both are impossible at war.
Good communications links, both voice and data, are important – but history shows us that they can be as much of a danger as a help. When overused or over-relied on, they tip towards a Critical Vulnerability vice a Critical Capability.
Better yet are efforts in instead invest in the ability of our commanders to understand themselves and their mission – and that of potential enemies. That should be the goal. A vain attempt to make the real world look like a game you play on your computer should not.
at 20:15
Share