Today's FbF is about not just a giant of a man, but a rare giant. I could not do him justice, only knowing him 2nd and 3rd hand an by reputation. I asked our friend Jerry Hendrix, who knew this great American personally, to provide us a guest post.

Jerry, over to you. 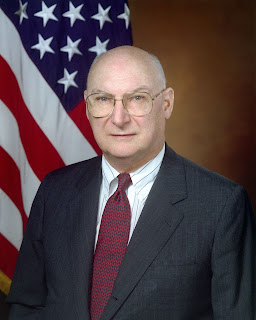 Andrew W. Marshall, known to his friends and numerous mentees as “Andy” entered government service in 1969 as a consultant and advisor to Henry Kissinger’s National Security Council staff. Prior to that he had worked over 20 years as an analyst at the RAND Corporation in Santa Monica, CA.

When he came east to assist the Nixon administration, he rented a small apartment and the furniture to go with it and never sold his home in Santa Monica, always expecting to return there. In 1973, when James Schlesinger, who had once worked for Marshall as a research assistant at RAND, moved from the White House to the Pentagon as Secretary of Defense, the decision was made to stand up an Office of Net Assessments within the Office of the Secretary of Defense, and Nixon appointed Marshall as its first director. He was reappointed by the next seven successive presidents through Barack Obama and served 42 years as the Director of Net Assessment.

Marshall developed the multi-disciplinary practice of net assessment over the two decades he spent at RAND. A mixture of economics, business management, history, organizational behavior studies, anthropology, and strategy, net assessments attempted to look at competitions between nations or alliances from a competitive strategy perspective, attempting always to match American advantages against its competitor’s weaknesses.

The practice of net assessment as established by Marshall was long and arduous, first looking at the competition in an overall manner and then isolating areas for focused analysis, and then writing a final product. Marshall was quiet, but he was also brilliant and meticulous. As legend has it, one report went through 35 drafts before he took the one final copy to the Secretary. As such, despite being appointed during the Nixon administration, no net assessments were completed during either Nixon or Ford’s time in office.

The office was to be kept open by Jimmy Carter’s SecDef, Dr. Harold Brown, only long enough to deliver the first five net assessments covering various areas of the US-USSR competition that had been in development, for his consideration. The implications and insights of those assessments were so powerful that Brown made his initial “Second Offset” decisions to act upon their diagnosis by investing heavily in stealth, space based systems, and precision strike technologies as well as by asking Marshall to remain on as the Director of the Office of Net Assessment.

Over the four decades he served, Marshall made a number of strategic projections, always 20-30 years out, regarding key trends in global competitions. He correctly saw the path to winning the Cold War against the Soviet Union, the need for a revolution in military affairs, and the rise of China as a great power and peer competitor decades ahead of other analysts. Other insights generated by the office remain highly classified and will remain so for some time to come.

Beyond the office’s actual “net assessments” Marshall also acquired a small budget with which he funded external studies through various think tanks, universities and consultancies. Via this method he both encouraged the exploration of key areas of analysis and technology trends. Studies commissioned by the office were rarely made public and the best were briefed directly to the Secretary of Defense.

Similarly, beginning in the 1970s, Marshall and the Office of Net Assessment began to be a conduit for the Secretary of Defense to explore certain ideas and strategies via wargames conducted in various formats and methods. Marshall was also well known for his annual “summer studies,” which were often conducted at the Naval War College in Newport, RI or at the United States Military Academy at West Point, wherein a group of senior decision-makers gathered to deeply explore strategic concepts in a seminar setting.

Without a doubt, Andrew Marshall’s greatest legacy can be found in his recruiting, education and continued mentoring of several generations of military officers who served in his office. At any given time, one officer of each service served as a military assistant within the Office of Net Assessment wherein they conducted primary research and consideration of strategic topics of interest to Marshall and the Secretary of Defense.

Some outside of the office began to refer to Marshall as “Yoda” in reference to the Star Wars character, due to his age, wisdom and habit in speaking in questions and some of these same people referred to his officer-assistants as “Jedi Knights.” Both Marshall and his military assistants forcefully rejected these labels, preferring instead “Andy” and the collective designation as members of “St. Andrew’s Prep School” (we have school ties). Regardless, many former Net Assessors went on to distinguished careers as senior government officials and strategic leaders.

Such was the bond between the schoolmaster and his students that as his time grew near at the age of 97, his former assistants flocked from around the country to take their turns quietly sitting at his bedside. At his remarkably peaceful passing, he was surrounded by warriors, scholars, and administrators, some long gone gray, all weeping.
Dr. Jerry Hendrix, CAPT USN (Ret.) is a retired Navy officer with experience in strategy, force structure planning, and carrier strike group operations who presently serves as Vice President of the Telemus Group.
at 05:30
Share