All hail the Ehrenkreuz der Bundeswehr 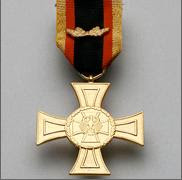 We should all nod our heads to the Germans - thanks.

Fourteen members of the Army’s 12th Combat Aviation Brigade on Thursday became the first non-Germans to receive Germany’s Gold Cross, one of that nation’s highest honors for valor.

The soldiers, based at U.S. Army Garrison-Ansbach, Germany, were honored for medevac flights they performed April 2 involving German troops who had been ambushed by some 200 Taliban fighters while on patrol north of the city of Kunduz, Afghanistan.

The firefight was still going on when the Black Hawk evacuation helicopters — two medical transport helicopters and one heavily armed “chase” helicopter — arrived, according to what Army Capt. Robert McDonough, who piloted one of the medical helicopters, told his father, Jack McDonough.

“The two Black Hawks did a combined seven landings into the middle of this battle. My son told me that he could see rounds hitting the blades of his helicopter and there were bullet holes in the Blackhawks,” Jack McDonough wrote in an e-mail message. “He said the incoming fire was so bad that at one point he banked the helicopter real hard to avoid the incoming rounds. He told me he saw the Taliban celebrating, thinking they had downed them.”
....
Lt. Col. Norbert Rahn, a spokesman for the German Federal Ministry of Defense, said in an e-mail message that this award to the 14 U.S. soldiers marks the first time that any citizen or soldier from outside Germany has been given The Gold Cross, or Ehrenkreuz der Bundeswehr, for “outstanding achievements under danger for life and limb.”

He wrote that at least 11 German soldiers were critically wounded when the 12th Combat Aviation Brigade soldiers arrived. Three did not survive due to the severity of their injuries, but the others were transported to safety.

He said that without the assistance from the U.S. helicopters, it would have been impossible to get the wounded to a field hospital and Germany would be lamenting the loss of additional soldiers. Even though the helicopters were under “steady, heavy fire. ... They completed their mission without hesitation, courageously and professionally,” Rahn wrote.

I did a backgrounder on the Gold Cross last year here. I would be remiss if I did not also recognize the efficiency of the German military's admin dept. Nice award timeline. Less than a month for an award of this level - from act to ceremony. I used to run one of the best Admin shops in the Navy, and we were lucky if we could do a FLOC in that time.
Oh, and the fact that almost a decade of war and no living MOH. Shame and pox on the senior leadership. Shame and pox.
Thanks Germany - we'll take it and will buy you a good beer some time.