Back in 2007, I did a Battle of Midway FbF that featured one of my favorite aircraft, the Brewster Buffalo. In the post, I focused on then 2LT William "Bill" Brooks, USMCR. 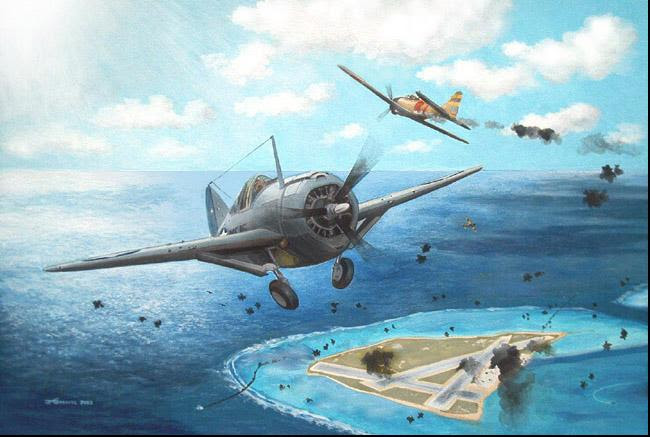 You could spend a lifetime on Battle of Midway posts - that is what I like about it.

This time, I want to focus on the men of Marine Fighting Squadron 221. Men who knew they were being asked to do a suicide mission, but did it - and did it well. They were, as Marines sometimes find themselves, on the butt end of the procurement curve. As the cream of the Imperial Japanese Navy was heading their way, they were asked to go into battle with an aircraft just not ready for varsity football; the Brewster Buffalo (F2A-3). Their squadron went into battle with 21 F2A-3 and 7 F4F-3 (Grumman Wildcat) planes. Read the after-action report by the now commanding officer, CAPT Armistead, USMC, the most senior surviving officer by the time the sun set 06 JUN 42. First hand accounts, and damning comments on the aircraft they took into battle. In para 6 of his opening letter, Capt. Armistead stated something we can all understand.

6. The F2A-3 is sadly out-classed in all respects by Japanese 00 fighters. Although all pilots of this squadron were aware of this fact, they drove their attack home with daring and skill

Right on target. Brave men will go into battle regardless of what they have to work with. The guilt does not lie with the warrior or the manufacturer (the Buffalo was OK when it was built, but to old design wise to be of use in '42 - though the Finns made good use of it against the Russians. What strikes me in some of these first hand comments, is that there were made inside 48 hours from the battle these men we in. Notice the tone and professionalism - and with little exception - no invective. Four Divisions of F2A-3 from VMF-221 took off that AM. 20 pilots overall. By the end of the day; - 12 KIA or MIA. - 3 WIA. - 5 survived (one due to the fact his aircraft had mechanical problems. That works out to a casualty rate of 75%. By the end of 06 JUN, when these reports were written, only 3 F2A-3 were still airworthy.

It is my belief that any commander that orders pilots out in combat in the F2A-3 should consider that pilot lost before leaving the ground.
...
As for the F2A-3, it should be in Miami as a training plane, rather than be used as a first line fighter.

The photo above is of one of the survivors, then 2LT Brooks, USMCR. Here is his story.

USMC 2dLT William "Bill" Brooks in F2A-3 Bureau No. 01523 (MF-16) was one of the few survivors of the June 4, 1942 morning interception of the incoming Japanese attack on Midway Atoll by VMF 221.
"At about 0600, the alarm sounded and we took off. My division climbed rapidly, and I was having a hard time keeping up. I discovered afterwards that although my wheels indicator and hydraulic pressure indicator both registered "wheels up", they were in reality about 1/3 of the way down."
Following LT. Sandoval down the right side of the incoming Japanese formation, Brooks looked back to
see a Japanese aircraft falling from his or Sandoval's fire. Losing contact with his division, he started to
climb for a second attack when the Zeros attacked. Diving (slowly with partially extended landing gear)
for the water, he circled the island while anti-aircraft fire drove off his pursuers.
" My tabs, instruments, and cockpit were shot up to quite an extent, at this time, and I was intending
to come in for a landing. I saw two planes dogfighting over in the East, and decided to go help my
friend if at all possible. My plane was working very poorly, and my climb was slow. As I neared the
fight, both planes turned on me. It was then that I realized I had been tricked into a sham battle put
on by two Japs, and I failed to recognize this because of the sun in my eyes. I turned and made a
fast retreat for the island, collecting a goodly number of bullets on the way. After one of these planes had been shaken, I managed to get a good burst into another as we passed head-on when I turned into him."
This is the moment captured by the painting
"I don't believe he could have gotten back to his carrier, because he immediately turned north and down. I again decided to land, but as I circled the island I saw two Japs on a Brewster. Three of my guns were jammed but I cut across the island, firing as I went with my one gun. I could not get there in time to help the American flyer, and as soon as the Brewster had gone into the water I came in for a landing at approximately 0715. My plane was damaged somewhat, having 72 bullet and cannon holes in it, and I had a very slight flesh wound on my left leg.
It is my express desire that LT. Sandoval, deceased, be logged up with the bomber which one of us got in our first run."
- From the after-action battle report of Bill Brooks - June 4, 1942 -

Hat tip reader Sal.
OBIT
Brooks, William Vincent
Dec 19, 1918 - Jan 19, 2010
Bellevue.
Born in Falls City, NE, son of Mary Elizabeth (Sailors) Brooks and Emmett Brooks. He was preceded in death by his son, two granddaughters, a sister and a brother. He is survived by his wife, three daughters and their spouses, the wife of his deceased son, seven grandchildren and three great grandchildren.
FUNERAL SERVICE Saturday, Jan. 23, 10am at Bellevue Memorial Chapel, Bellevue. He will be interred at Bellevue Cemetery. VISITATION will be Friday, Jan 22, 6-8pm at the Chapel. Donations to the Salvation Army, Bellevue University Foundation or favorite charity are requested in lieu of flowers.
BELLEVUE MEMORIAL CHAPEL
Heafey-Heafey-Hoffmann
Dworak-Cutler
22nd & Hancock, Bellevue 291-5000