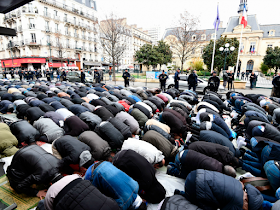 The story of Europe's growing struggle with its intentional own-goal of importing a critical mass of people who will not simply, "become European," will be an ongoing story this century.

Outsiders also misunderstand the situation on the ground in France as it deals with radical Islamism. After the recent attacks, the government chose to close a mosque and an NGO suspected of ties with radical groups. But more consequential legislative action was initiated this fall, when the French government proposed a bill seeking to fight “separatism.” Building on months of dialogue with religious organizations like the French Council of the Muslim Faith, Macron suggested stemming foreign funding for mosques and the training of imams, aiming to instead privilege domestic training of religious scholars in accordance with democratic values.

The term “separatism” was chosen concertedly. Scholars such as Gilles Kepel, who has been influential in Macron’s thinking, have documented that France faces a struggle with Islamism that extends beyond terrorism. The deeper societal challenge involves the growing influence of radical groups in certain neighborhoods that exist outside the state’s purview, a countersociety that operates at the expense of women, LGBT people, Jews, and many others. Kepel’s book Terror in France recounts the trajectory of figures like Mohammed Merah, the terrorist who killed seven people, including three Jewish children, in Toulouse in 2012. At the time, Merah was seen as the ultimate “lone wolf,” a former petty criminal-turned-radical, acting on his own, without receiving orders from an organized terrorist network such as al Qaeda or the Islamic State. But years of investigations showed a different picture from the convenient lone-wolf narrative. Merah was socialized in a radical ideology that was the norm in his direct environment. From his family to his friends to his mosque (that Islamic State leaders Fabien and Jean-Michel Clain also attended), Merah’s ideological surroundings laid the groundwork for his radicalism. Rather than look at individual profiles and the psychological underpinnings of radicalism, the French government wants to tackle the ecosystems that have allowed them to prosper.

All this adds to many reports over the years of growing pressure on teachers trying to teach about the Holocaust, sex education, or even basic biology. In 2002, a book written by a collective of high school professors, The Lost Territories of the Republic, warned of alarming sexism and anti-Semitism in the French banlieues. A female professor interviewed by the Financial Times last month reported: “I don’t feel safe. If I have to show a film with a nude scene or a couple embracing, there’d be shouting, and not just the normal teenage stuff, real aggression, kids saying, ‘This is not OK. It’s not allowed.’” Male physicians have been put under pressure to avoid attending to female patients alone. Mayors have come under criticism for acceding to demands from religious groups for separate hours for women in public swimming pools. More recently, a group of Sorbonne scholars (a university not known for its far-right activism to say the least) led by Bernard Rougier published a series of empirical studies titled Territories Conquered by Islamism, warning that “Islamist networks have managed to build enclaves at the heart of popular neighborhoods.” Jews, who represent 1 percent of the French population but are disproportionally targeted by hate crimes (about 40 percent of attacks most years), have largely deserted these areas in the last decade.

This was, of course, avoidable ... but for decades politicians and cultural leaders - for reasons best explained by them - refused to clearly see the problem. They were more interested in being called nice things by all the right people. To accrue personal virtue today at the expense of the security and national unity of their children's future.

For their part, the French seem to be a victim of our garbage mainstream press and are misreading the USA;

An op-ed in Le Monde denounced a “disconcerting American blindness when it comes to jihadism in France.” Macron’s measures have frequently been analyzed through the prism of domestic electoral politics as allegedly trying to co-opt the far-right. But this analysis represents a gross misunderstanding of the French political reality. A recent poll on the upcoming French presidential election in 2022 shows a situation eerily similar to the one that prevailed in 2017, when Macron roundly defeated Marine Le Pen in the second round. The vast majority of French citizens feel deep concern over the situation. According to a IFOP survey last month, 89 percent of respondents considered the terrorist threat to be “high,” 87 percent that “secularism is in danger,” and 79 percent that “Islamism has declared war on the nation and the Republic.” Are these all National Rally voters?

While pointing to a “crisis” within Islam, Macron was careful to distinguish the majority of French Muslims living and observing peacefully from the radical minority that poses a threat. The comparisons with far-right rhetoric, which precisely refuses to make such distinctions, thus completely miss the point. For many French liberals, this fight is not easily separable from the one against the far-right—both are a defense of liberal democratic values against illiberal ideologies. French Justice Minister Éric Dupond-Moretti thus dismissed calls for emergency measures coming from the National Rally, insisting that the rule of law was the only possible solution.

There is a large mass of Americans who fully understand the challenge that France faces, and support the French people's efforts to preserve their culture from a hostile import.

The problem is that they won't hear it from the French language press that mostly copies what it reads from NYT and WaPo. They think that is the USA, and as we know - it isn't.

As I've mentioned over the years here, in the years I lived in Europe, this topic came up not infrequently over beers with my European military colleagues.

The most sobering was one long evening in Norway at a table full of Norwegians, Swedes, Danes, Finns, me and a Brit. At a dark moment, a Swedish Field Grade army officer coldly stated, "Our politicians will wait too long and things will get too bad and then they will call on us and the police to do what we have done before in Europe. It will not be pleasant."

I didn't ask for more - we all knew what he was saying.

I wish Macron success. If the political center will not take care of the security and cultural concerns of the people, the people will seek champions on the fringes. If they cannot find a responsible way to take care of this systemic problem - through incompetence or prolonged inaction - then Europe will force itself to become something it does not want to become, or accepts its transformation in to something their ancestors fought a thousand years to prevent.

Read all of Benjamin Haddad's article over at FP. Very well done.