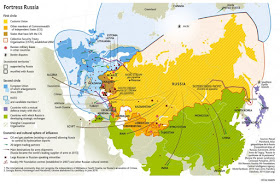 The two-dimensional view of Russia and Putin we so often, even by otherwise serious natsec folks, is anti-intellectual and counter-productive in the extreme.

If you want to have a better understanding of Russia and her interplay with the West, you need to read as widely as possible from a variety of ideological viewpoints. It is especially important to read as much as you can from outside the USA. It is the only way to make sure you don’t get yourself too narrowly scoped by agenda and ignorance.

Everything thing you read, especially about Russia, you need to review the background of the author, the nationality of the author, and the publication the author’s work is found. Even obviously biased media organizations from RT to The Nation can have useful articles, you just need to make a conscious effort to remember that as you read.

In line with my own advice, today I offer to you an article by retired British diplomat Andrew Wood, presently a fellow at Chatham House, writing over at the Dutch think tank RaamopRusland.

Read it all, but here are the items I found most interesting;


Dmitri Trenin's address of 18 May to a conference at The Hague has led to a debate organised by the RaamopRusland think tank as to where the blame lies for the current estrangement between East and West.

Trenin is the Director of Carnegie Moscow and also an experienced and authoritative exponent of views widely held within the Moscow foreign policy establishment. In setting out his inevitable conclusion that the United States bears the principal responsibility for the present situation, he argued that the Soviet Union lost a real war, call it ‘Cold’ though we do, to the United States and that today's Moscow is justified in reasserting itself because of the dismissive way that it was treated by Washington thereafter. Russia, as the successor state to the USSR should have been taken by Washington as a co-equal in deciding the affairs of lesser nations, not least in Europe.

That may help explain the Russian insecurities, but being on the losing end of a conflict does not automatically grand the lowe the status as a co-equal. In a word; delusional.

Wood does a good job throughout the article using Trenin as a foil.


It is perhaps even more to the point that the collapse of the Warsaw Pact, and the disintegration of the Soviet Union which followed it, stemmed from the internal decay of the USSR and the eventual defeat of military force used by Moscow to ensure the subservience of its own ostensible allies.

Ah, yes. The policy of containment – with teeth. It would be a bit neglectful not to mention that there was very real fighting in the Cold War. At the top of the butcher’s bill we need to mention the 36,574 Americans (and thousands of non-Korean allies as well) killed in action in the Korean War, and 58,193 American dead in Vietnam. Those wars made a point to Communists that the USA would fight.


That repression has helped to feed the emotional prejudices that lie behind the Fortress Russia proposition. Taking the United States to be your principal enemy as for instance Trenin did on 18 May (‘Russia's conflict is not with the West, it's with the USA.
By and large Europe is caught in a crossfire.’) may be, and indeed is, questionable, but such beliefs, which are encouraged by official propaganda, are now widely shared.

Another reason why we need Continental European NATO to spend the bare 2% GDP on defense. With Germany at the front with firm Baltic republics and Visegrad Group nations at the front, it will force the Russians to see this is not a rivalry of two nations.


Russia is not alone in its concerns as to the way that the United States, especially under the present Trump Administration, tries to force its way in particular cases. But the United States has not in fact tried or been able over the years unilaterally to draw up the international rule book that has by and large been in accepted international force for decades. There is the further problem of what exactly Russia would like to see take its place.

Exactly, and not should the USA.


‘Finlandisation’ was the product of particular circumstances, which do not apply to Ukraine. One of those was the Cold War militarised division of Europe between two rival camps. The supposition that Russia has a sphere of interest justified by its security needs is a pale reflection of that. No other state in Europe would willingly accept the subordination to Moscow's diktat which would go with accepting a tributary role in an arbitrarily defined ‘sphere’. It is the attempt to force others into such a condition, or the fear of it as a possible threat, that has led many to seek shelter in NATO, or if that is not on offer, to get close to it.

That won’t stop Russia to, as it is doing, nibbling around the edges.


The question of who is to blame between Washington and Moscow for the estrangement between them, or rather between Moscow and the West, seems to me to be the wrong question.

Dmitri Trenin suggested that the blame rested with Washington, the United States being the stronger power. Others might point their fingers at the Kremlin, with cogent examples to support them. But the pursuit of a bilateral US/Russia relationship as the decisive factor in achieving a healthier relationship between Russia and the West is a chimera stemming from assumptions derived from the Cold War era. Neither Washington, which in any case has other preoccupations than dealing with Russia, nor Moscow, which may be more focused, can command the obedience of other countries, in Europe and for that matter outside it too. These countries have their own concerns to nurture.

Russia has evolved in such a way that Trenin can convincingly assert that his country will not accept the tutelage of the USA, and to believe that this is a real threat that Russia must face. Other countries are not ready to accept the tutelage of the Kremlin, for that matter, and to defy the prospect of it being imposed upon them. Neither power, whether the stronger or the weaker, can look to bilateral negotiations or for that matter bilateral competition to decide for others what the outcome should be in particular cases. Not even the Cold War itself was dissolved on that basis. Europe today is evolving in uncertain ways. Russia will not remain in its present condition for ever. The United States has a troubled Administration.

In some ways, Russia is the former heavyweight fighter past his prime trying to get back in the ring, but insists that only the reigning champion is a worthy opponent. Frustration at not being taken as a player of consequence is fed by an inflated ego, insecurity and a wounded pride.

How to get to a better place with Russia – a nation we really should be partnered with and not rivaled against? I don’t know, but perhaps it isn’t a diplomat to get us there, not a businessman, and unquestionably not someone in a military uniform – perhaps we need to get a therapist.
at 15:10
Share