With both mines and Korea in the news this week, time to bring back an encore FbF.

A minor ship in a minor action - but for every Sailor lost at sea in combat, all are equal.

Brief narrative report of loss of USS Magpie while on Minesweeping duty off Chusan Po, Korea. Ship’s forward portion exploded and after section settled by the head when Magpie struck a mine. 12 survivors.
10 October 1950

Subject: Loss of the USS MAGPIE (AMS25)
Reference: US Navy Regulations 1948, Article 0778
1. As senior survivor of the USS MAGPIE (AMS25), my version of the MAGPIE loss is as follows: At about 1700, minus 9 zone time, 1 October 1950, I was on watch on the fantail, during mine-sweeping operations. The starboard sweep gear and magnetic tail were streamed. Three hundred fathoms of sweep wire was in use. We were in approximate position latitude 36-30 N., longitude 129-30 E., off Chusan Po, Korea, and on a southerly course. Steaming at ten knots. The USS MERGANSER (AMS26) was stationed about five hundred yards astern and to starboard of the MAGPIE. At about this time there was a tremendous explosion forward and the entire forward portion of the ship, forward of the stack, appeared to explode. The remainder of the ship immediately started to settle by the head. During this period I took shelter under the towing winch but could see forward. After the debris stopped falling I assisted in launching the port after ten-man life raft. After that I proceeded as far forward as I could to the break abreast of the stack, on both port and starboard sides, with the view of assisting any survivors or saving the ship. I encountered no one. After this inspection I abandoned ship, port side, to assist BENNETT, 365 32 49, EMFN, USN, who was in the water and shouting for help. BENNETT was injured and unable to adjust and inflate his life jacket. I assisted BENNETT to the raft and both of us boarded the raft. After being in the water and on the raft for a period of about thirty minutes, the USS MERGANSER (AMS26) Wherry towed us to the MERGANSER.
2. There were twelve survivors: CARLOCK, Dale T., 344 79 03, FN, USN; CARPENTER, Vail P., 393 08 57, BMC, USN; DOBBS, Thomas D., 325 16 58, ETSN, USN; ESPINOZA, Leo L., 369 20 83, SN, USN; KEPFORD, James W., 345 02 15, FN, USN; McCLAIN, James H., 569 02 59, FN, USN; HARRISON, William E., 234 41 27, GM3, USN; BENNETT, Alex W., 365 32 49, EMFN, USN; BENSON, Richard B., 325 74 34, SN, USN; BLASSINGAME, Henry A., 581 07 35, CSSA, USN; KASTENS, Howard L., 344 82 35, USN; SANDERS, Howard W., 570 94 48, QM3, USN. The first seven survivors are now quartered on board USS DIXIE (AD14). The last five were transferred by USS MERGANSER to USS REPOSE (AH15) at Pusan, Korea for treatment. I do not know what disposition was later made of them.
3. To the best of my knowledge all records and logs were lost, except pay accounts which were on board the USS DIXIE (AD14). Pay account of HARRISON, W.E., 234 41 27, USN, were lost with the USS MAGPIE.
4. It is understood that Commander United Nations Blockading and Escort Force, Far East, had ordered an investigation to inquire into the circumstances resulting in the sinking of the USS MAGPIE and the injury or loss of the members of her crew. – (signed) VAIL P. CARPENTER

Most Sailors who are lost at sea are never found. Their families have no body to honor or lay to rest.


The Department of Defense POW/Missing Personnel Office announced today that the remains of a U.S. serviceman, missing in action from the Korean War, have been identified and are being returned to his family for burial with full military honors.

U.S. Navy Ensign Robert W. Langwell, of Columbus, Ind., will be buried in Arlington National Cemetery on July 12. On Oct. 1, 1950, Langwell was serving on the minesweeper USS Magpie when it sank after striking an enemy mine off the coast of Chuksan-ri, South Korea. Twelve crewmen were rescued, but Langwell was one of 20 men lost at sea.

In June 2008, personnel from the Republic of South Korea’s Ministry of National Defense Agency for Killed in Action Recovery and Identification (MAKRI) canvassed towns in South Korea in an effort to gather information regarding South Korean soldiers unaccounted-for from the Korean War. An elderly fisherman, interviewed in the village of Chuksan-ri, reported that he and other villagers had buried an American serviceman in 1950 when his body was caught in the man’s fishing net.

The MAKRI located the burial site on April 28, 2009, where they excavated human remains and military artifacts. The burial site was approximately three miles west of where the USS Magpie sank in 1950. The team turned the remains and artifacts over to U.S. Forces Korea, which sent them to Joint POW/MIA Accounting Command for analysis.

Among other forensic identification tools and circumstantial evidence, JPAC scientists used dental comparisons in the identification of Langwell’s remains. 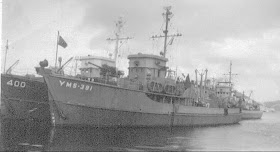