For they sow the wind And they reap the whirlwind. The standing grain has no heads; It yields no grain. Should it yield, strangers would swallow it up.
------ Hosea 8:7

It is time to revisit the second and third order effects of the President's 2009 speech at West Point.

This is just the latest.

The U.S.-led coalition in Afghanistan withdrew all international military personnel from Afghan government ministries in Kabul yesterday after two more Americans were killed on the fifth day of violent protests over the burning of the Koran at a coalition military base.

The two, a lieutenant colonel and a major, were both shot in the back of the head in the heavily guarded Interior Ministry, according to Western officials who spoke on condition of anonymity because they weren't authorized to disclose the information. The Taliban claimed responsibility, saying it was retaliation for the burning of the Muslim holy book.

The events of the last week are just another reminder that we find ourselves on a well worn path to defeat. We knew the path was there, but we took it anyway. The reason was simple - we picked the wrong point man.

Our leaders and their people live in a parallel universe. It is past amateur hour - this is professional malpractice writ large.

U.S. Ambassador Ryan Crocker and Robert Gibbs, Obama's former press secretary, said they believe Afghan President Hamid Karzai's fragile government could collapse and the Taliban would regain power if the U.S. were to walk away.

"This is not the time to decide that we're done here," said Crocker. "We have got to redouble our efforts. We've got to create a situation in which al-Qaida is not coming back."

Added Gibbs, "What the president's trying to do now is get us to a point where we can hand off the security of Afghanistan to the Afghans and that we can bring our troops home."

Do they actually listen to themselves? To the AFG ear - we have already announced that we are walking away. The President has stated he wants to walk away. We are not redoubling our efforts - we are shortening our withdraw timeline; AKA retreating faster.

The Obama Administration was given a path to success - the uplift of forces in '08-09 that would help create the conditions to have a better chance of victory - but they threw it away. The AFG people live in a world of actions, not words. Crocker and Gibbs should both be ashamed of themselves.
As we are not acting like we are in it to win it - is it too early to ask the question: When is the point where we question the morality of asking one more family to give their son or daughter's life in AFG?

From the President to the uniformed Commander in Kabul - I see nothing but weakness. We show nothing but weakness to those who value nothing more than strength. In a way - I don't blame the AFG people from turning on us. They have to live there - and if they know we are leaving and in our wake we put the Karzai government to sort things out - they would be a fool not to start to accrue some street-cred with those who seem to be the power in waiting.
Weakness and defeat. We signal it in AFG - and we signal it at home. 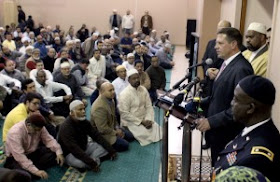 This afternoon, Islamic Society of North America (ISNA) President Imam Mohamed Magid hosted an event featuring senior Pentagon officials and U.S. Military Chaplains. The event served as an opportunity for the Department of Defense (DoD) to deliver an official apology for the actions of American soldiers in Afghanistan who unknowingly burned Qurans at Bagram Airfield on Monday.

Assistant Secretary Lavoy apologized on behalf of the DoD to the American Muslim community and assured attendees that the Quran burnings were an unfortunate mistake. He highlighted the many diverse faiths represented in the U.S. military and the strong commitment by the DoD to respect each and every one of those religious beliefs equally. He also assured attendees that the military is investigating the incident and all troops are being retrained in the handling of religious materials.

Bask in the Dhimmitude. Video is here for your pleasure.

That is an unforced error in the extreme. Diplomacy isn't about an unending apology tour. When we act in this way; all we do is advertise a passive-receptive attitude that has never commanded respect. The Romans had a term for it, Cinaedus - look it up.

... and yes, about that pic on the right; it begs the question:


Of course - they are no women of any type to be seen because ISNA is a home of radical Islamists; misogynistic, backward looking, supremacists who have no desire to join the Western ideal of openness, freedom, and equality.

Oh, but to say that is judgmental ...

That visit to ISNA is sad and a disservice not only to our nation as a whole - but to the good, modern American Muslims we live, work, and go to school with.
We deserve this whirlwind that is only now starting - we voted for it.

How many years did I spend on AFG ... only to find myself here?

I shouldn't blog this early ... maybe I'll feel better by lunch.UPDATE: Well, I've had lunch and feel about the same. Oh, and did someone say "weakness?" Yepper's. Uncle Jimbo at BLACKFIVE smells it too.
at 05:20
Share