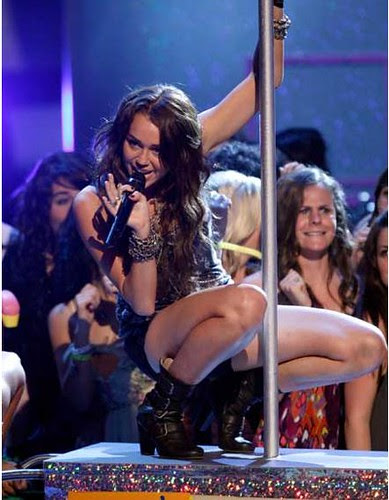 As a father of girls "of a certain age" - I have to deal with all things Miley Cyrus.
So, once again, thanks to the dysfunctional Cyrus family I have had another teaching moment.
As a society, we cannot complain about our children's lack of a childhood, STDs and pregnancy among the very young, ped0phi1ia and kiddpr0n and everything else that goes along with it when we sexualize our young at such an early age .... and especially those younger kids look up to.
What we have here is something that is much different than we had with the younger Spears girl that was two kids making the mistakes clueless kids have been making for thousands of years.
No, this is all about the adults. From her parents to her agent and all involved in the production.
Hollywood will turn you into a wh0re. I come back again to Patrick Swayze who once said something to the effect, "This town will turn anyone into a whore if you let them."

Sad in so many ways. Classic case of a few willing to sell their soul for money now.

The kids are alright - it is the adults who are sick. I'm with the girl on the right; her facial expression says it all.

My eldest calls those "booty shorts." We called them Daisy Dukes ... and yes, I see 12yr old girls with them all the time. That doesn't mean it is good for the girls or the culture - some may think it is not big deal, but I guess that is one opinion from those who probably don't have kids. Watch the below and tell me if you want your children to do that in front of millions of adult men.

My girls are not impressed. That, of course, makes me proud of them - today they both of them said they like Selena Gomez better anyway. Good girls.
at 22:47
Share